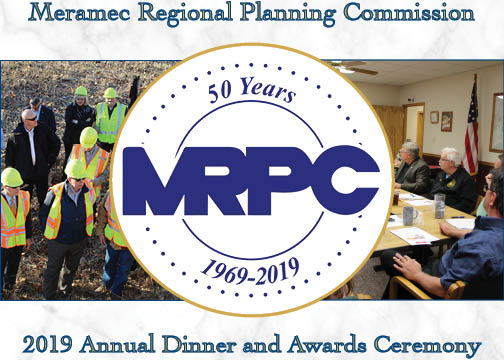 ST. JAMES—Each year Meramec Regional Planning Commission (MRPC) honors residents of the Meramec Region who give to their communities by volunteering their time, talents and support. This year, 13 awards will be presented at MRPC’s 2019 Annual Dinner Oct. 24 at the Stonebrooke Center at 500 G.W. Lane St., Waynesville.

Individuals being recognized by MRPC for contributions to their communities are:

The public is invited to attend the event in Waynesville. Tickets for the event will cost $30. For reservations, contact MRPC at 573-265-2993. The deadline for reservations is Oct. 15. A reception will be held prior to the dinner beginning at 5:30 p.m. Dinner will begin at 6:30 p.m. with a program and awards presentation following.  Lt. Gov. Mike Kehoe will be the featured speaker for the evening.

The Eugene E. Northern award, the highest honor given by MRPC for volunteers and community service, will also be announced at the annual dinner. The award recipient is kept secret until announced at the Annual Dinner.