About the Meramec Region

Find out why you and your business should be in Missouri’s Meramec Region where you’ll find all the necessities for success plus small town charm, picturesque natural beauty and diverse cultural heritage.

The Meramec Region is an eight-county area located in the southeast-central portion of Missouri.

The area covers over 5,154 square miles and includes 36 municipalities. The region, comprised of Crawford, Dent, Gasconade, Maries, Osage, Phelps, Pulaski and Washington counties, is marked with gently rolling hills, deep valleys and plateaus. Numerous rivers and streams traverse the region, creating a natural draw for outdoor enthusiasts. Many of the small towns are industrial havens, yet the small farmer is still prevalent. An abundance of wineries dot the countryside, making it a popular draw for tourists.

It was Missouri’s own Harry S. Truman who said, “If you are going to ask people to vote for you, you must know their history.” In the Meramec Region, that history is diverse and varied, and this makes the region’s heritage rich and unique.

The eight-county Meramec Region is home to 201,254 people and all still possess a flavor of their ancestors. In the far northern reaches of Osage, Gasconade and part of Maries counties, the heavy influence of German immigrants is still evident today in the architecture, customs and penchant for organization. In the southern reaches of the region—primarily Dent, Crawford and part of Phelps and Pulaski counties—one still sees the heavy influence of English immigrants, who first called Kentucky and Tennessee home but then moved to the Ozarks when Kentucky and Tennessee became “too crowded.” These folks prided their individualism and independence and preferred minimal government influence. If they could accomplish it on their own, they would—and still do. 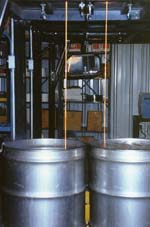 The areas in between possess a mixture of Italian heritage in the wine-growing area around St. James and Rosati and a French connection in Washington County. These unique cultures add to the rich texture of the Meramec Region’s cultural heritage.

Due in part to this rich culture, the region is steadily growing as more and more people decide to leave the cities behind or simply yearn to return to their roots and a clean, peaceful and picturesque environment.

Individual 2000 county populations range from a low of 9,176 in Maries County to a high of 52,274 in Pulaski County. The largest city in the region is Rolla, the county seat of Phelps County. It has 19,559 people. The smallest city is West Sullivan in Crawford County with 119 residents.

The region is predominantly white with only a 9.0 percent non-white population. Of the region’s 17,769 non-whites, 7,822 were Black or African American, 1,304 were American Indian or Native Alaskan and 3,265 were Asian, Native Hawaiian or Pacific Islanders. Pulaski County is the region’s most racially diverse county with 77.3 percent of its population being white. Pulaski County is home the U.S. Department of Defense’s Fort Leonard Wood.

Incomes in the Meramec Region continue to be lower than the state or region. The estimated median household income, based on 2010 Census information, was $48,794. The state median income was $57,661 while the U.S. median income was $62,982.

The Meramec Region has 78,513 total housing units with 66,974 occupied, according to the 2000 Census. The average population per unit in the region is 2.51 people, which is very close to the state average of 2.48 people.

Over the years, the region has diversified its economy – after taking hard hits in the mining and textile industries. In the region, services was the largest employment sector, followed by manufacturing and retail trade. Over half of those employed in the service sector were in health care or education. Based on U.S. Census reports, in 1997, the region had 220 manufacturing firms. The 2004 Missouri Directory of Manufacturers listed 254 manufacturing firms in the region.

The major employer in the region is Fort Leonard Wood with 2,300 civilian employees, followed by the Phelps County Regional Medical Center with 1,575 employees and the Missouri University of Science and Technology with 1,500 employees. The region’s two major private manufacturing employers are the Wal-Mart Distribution Center with 1,175 employees and Briggs & Stratton with an estimated 1,000 employees.

Three federal highways pass through the region: Interstate 44, U.S. 63 and U.S. 50. Interstate 44 bisects the region in a northeast to southwest direction and serves as the major highway between St. Louis and Springfield with Rolla being about the half way point. U.S. 63 connects Vienna and Rolla with Jefferson City, and U.S. 50 runs east and west through Gasconade and Osage counties. Several state highways connect these federal highways to link smaller communities and provide access to the quiet,

picturesque places around the region. And natives and visitors alike can still get their kicks on Route 66. The Mother Road winds its way through the region, paralleling Interstate 44

Several Meramec communities have airports. The Waynesville/St. Robert Regional Airport at Forney Field in Pulaski County is located on Fort Leonard Wood military base, yet is accessible to the public. The airport is the only one in the region featuring an air traffic control tower. The Rolla National Airport, located at Vichy and operated by the city of Rolla and the Sullivan Airport, operated by the city of Sullivan, are defined as B-2 airports and are used primarily by airplanes with approach speeds up to 120 knots and wing-spans up to 79 feet. Other airports in the region – Washington County, Salem, Cuba, Owensville, Hermann and Linn State Technical College – are classified as B-1s, which means they serve airplanes with approach speeds up to 120 knots and wingspans up to 49 feet.

Three railways serve the region. Burlington Northern operates the most miles of track in the region. That rail line follows the general route of I-44 through Crawford, Phelps, and Pulaski counties.

The former Rock Island now has a new owner and plans are under way to open at least a portion of the rail line for freight. Amtrak also crosses the Meramec Region and stops at its very northeast point at Hermann.

Navigable water transportation is provided at three locations in the region, all on the Missouri River. Those sites are Hermann, Gasconade and Chamois.