Water district updates to be completed in spring 2016 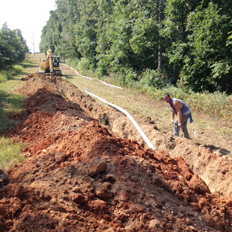 ST. JAMES—Phelps County Water and Sewer District No. 1 (PWSD) customers in Edgar Springs can expect work to be completed on a $1.3 million project to replace mainlines and install an additional standpipe by late spring of 2016.

“We have most everything in the ground and will now be working on clean up,” Henson said. “The standpipe people will start next week.”

The project, which began in 2011 when grant applications were submitted to the Missouri Department of Economic Development Community Development Block Grant (CDBG) program and USDA RuralDevelopment program to repair, replace or add storage pipelines and mainlines, broke ground in 2015.

The updated system will improve service for over 600 residential and commercial customers in Edgar Springs and the Phelps County R-3 School District facilities that were experiencing issues from the original 1966 water system. The new additions will be the district’s first major upgrade since the original installation.

“Over the years, the district has added to the water system as more residents moved in, which has led to the upgrade,” Henson said.

While customers won’t see an increase in water pressure, they will have more consistent service.

“The new system will ensure water pressure is consistent, even during high volume usage,” Henson said.

Missouri Engineering Company in Rolla performed the final engineering design and is handling the construction inspection; MRPC for administration on CDBG funded activities, also assisted with the project.

Meramec Regional Planning Commission prepared the original grant applications on behalf of the district and is handling the grant administration.

Formed in 1969, MRPC is a voluntary council of governments serving Crawford, Dent, Gasconade, Maries, Osage, Phelps, Pulaski and Washington counties and their respective cities. A professional staff of 24, directed by the MRPC board, offers technical assistance and services, such as grant preparation and administration, housing assistance, transportation planning, environmental planning, ordinance codification, business loans and other services to member communities.

To keep up with the latest MRPC news and events, visit the MRPC website at www.meramecregion.org or on Facebook at www.facebook.com/meramecregion.