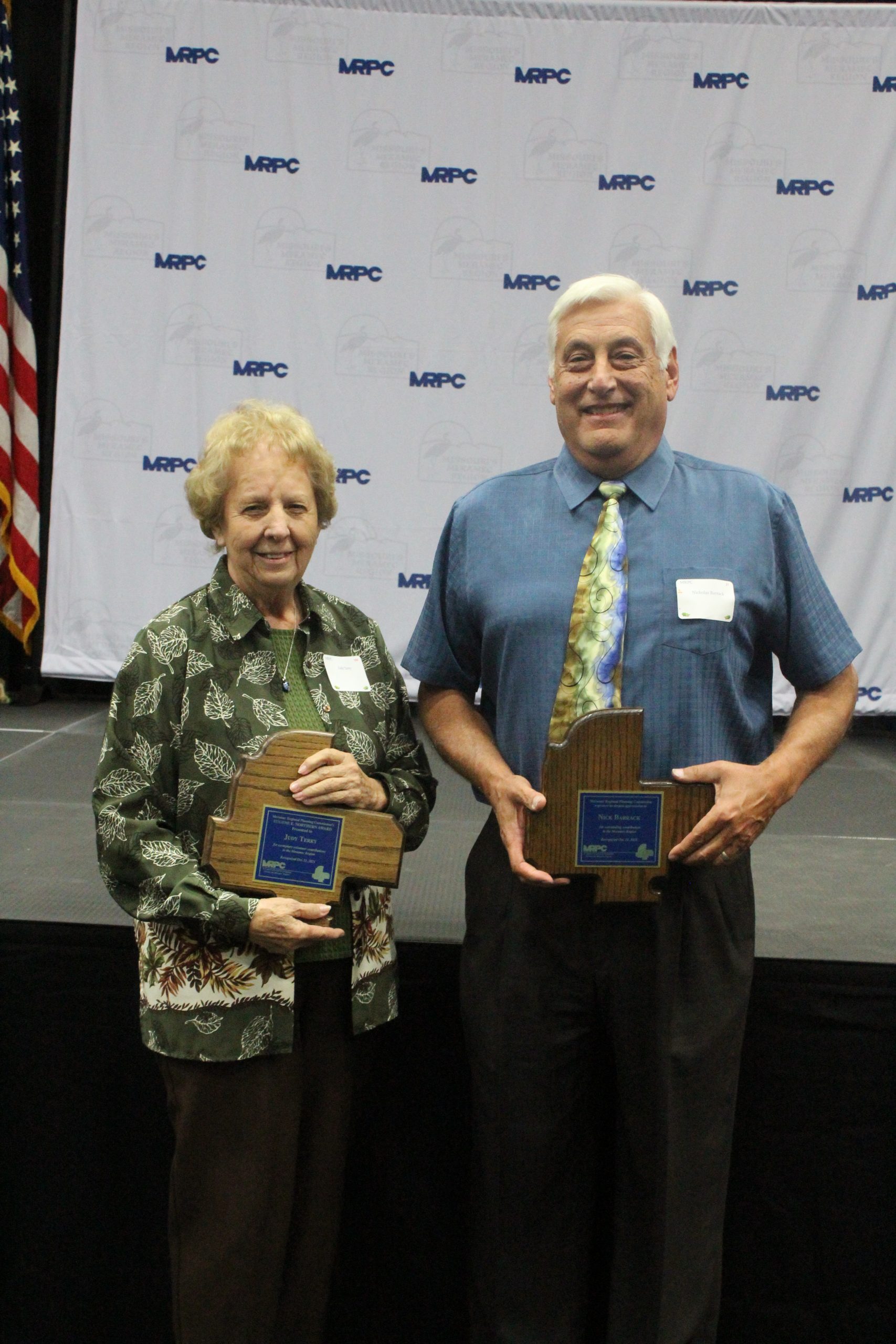 ST. JAMES—Judy Terry and Nick Barrack, both of Rolla, were honored for their volunteer efforts during the Meramec Regional Planning Commission’s (MRPC) annual dinner Oct. 21 at State Technical College in Linn.

Terry received the highest honor given to MRPC for volunteers and community service – the Eugene E. Northern award.

Terry of Rolla was nominated by MRPC Board Member John Butz. Judy has worked tirelessly for the citizens of Rolla and Phelps County. For the last 19 years, Judy has served as the Phelps County/City of Rolla Regional Volunteer for the American Red Cross. As part of her responsibilities with the Red Cross, Terry works to provide fire victims with hope after experiencing the tragedy of a fire. Through the Red Cross, she works to provide housing, clothing and food to each victim regardless of the circumstances. She has responded and continues to respond to fires at all hours of night, in all weather conditions with many of them emotionally and physically injured.

Barrack, also nominated by Butz, received a 2020 outstanding volunteer award. Barrack has been a business owner in the Rolla area since 1976 and is the current owner of USA Tours, Inc. of Rolla and CSE Construction Co., Inc. As president of the Rolla Municipal Utilities, he personally led the charge to bring MoPEP, the city of Rolla, and RMU together to house the location of the new solar energy farm. In spring/summer 2020, Barrack and his entire team, initiated the total interior and exterior restoration of the 120-year-old 1501 Frisco Train, located at Schuman Park in Rolla. The value of the work is estimated at $500,000, but cost the community less than $12,000. Barrack is also involved in the Rolla Chamber of Commerce, Rolla Downtown Business Association, Phelps for the Fort, Greentree Christian Church and was a founding member and Chair of the Rolla Route 66 Summerfest Committee where he has been active for over 20 years. He was also the recipient of the highest award given by the Rolla Area Chamber of Commerce.

Some 14 other awards in the categories of outstanding individuals, outstanding local agency representative, outstanding contributions to a community and outstanding youth volunteers were given at the dinner as well.

The Eugene E. Northern award for 2020 was presented to Ralph and Jerry Voss of Linn.