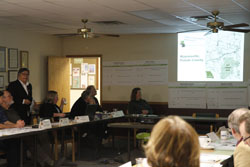 Mayor Luge Hardman presents on the Waynesville Transportation Alternatives Program application that would allow the city to improve accessibility and connectivity to the sidewalks along Historic Route 66 at the Dec. 8 meeting of the Meramec Region Transportation Advisory Committee.