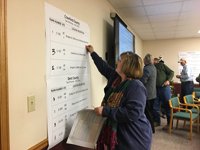 Vicki Bade, representing Maries County on the Transportation Advisory Committee, votes for the regions top transportation priorites at their meeting on Dec. 14.

ST. JAMES — The Meramec Region’s Transportation Advisory Committee (TAC) decided the expansions of Highways 63 and 50 to four-lane corridors remain the number one and two regional transportation priorities, respectively, at its December meeting. The proposed projects on Highway 63 and Highway 50 have topped the regional priority list for several years.

Also during the evening, the TAC heard an update on the Missouri Rock Island Trail project from Greg Harris, the executive director of the Missouri Rock Island Trail. Harris was requesting a letter of support from the TAC to encourage the state of Missouri to accept the trail from Ameren Missouri. While the state under the Nixon administration accepted the trail, Gov. Greitens had requested additional public comment on the issue. The TAC decided to provide a limited letter of support, supporting the trail project in the cities of Bland, Belle and Owensville where the municipalities have already begun fundraising and work on the trail projects. The limited letter of support was due to the concerns of some TAC members about property rights where the trail goes through individuals farms.