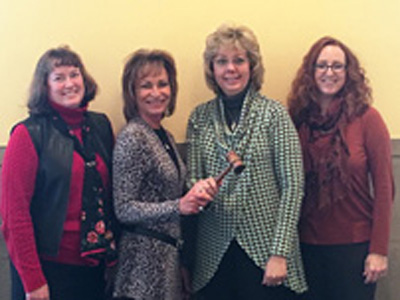 ST. JAMES—Bonnie Prigge, executive director of the Meramec Regional Planning Commission (MRPC), was elected president of the Missouri Association of Councils of Governments (MACOG), during the group’s Jan. 7 meeting in Jefferson City.

MACOG is the statewide organization representing Missouri’s 19 regional planning commissions and councils of governments. These professional organizations represent the entire state of Missouri and are committed to enhancing the state’s regions. Regional councils are engaged in a myriad of activities, including economic and community development, housing initiatives, safety and security, transportation planning, environmental issues and quality-of-life issues.

Prigge has represented MRPC on the MACOG board since her appointment as executive director July 1, 2011.

MRPC is a voluntary council of governments serving Crawford, Dent, Gasconade, Maries, Osage, Phelps, Pulaski and Washington counties and their respective cities since 1969. Prigge heads a staff of 24 professionals and support staff with an operating budget of over $1.8 million and pass-through funds of over $8 million in FY2014-15. MRPC is located at 4 Industrial Drive in St. James.

Prigge’s education in the communications field and professional experiences will be an asset to MACOG. A graduate of Belle High School, she holds a bachelor’s degree in journalism from the University of Missouri-Columbia. She joined MRPC in 1991 as a communications coordinator/grant writer and was promoted to assistant director in 1995, a position she held until her promotion to executive director in 2011.