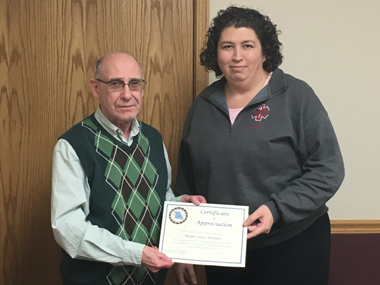 Crocker Mayor James Morgan (left) received a certificate of appreciation for his years of service as the representative for mayors and city officials to the Region I Homeland Security Oversight Committee (HSOC) at his final meeting Jan. 26. Presenting the certificate is HSOC Chairwoman Tabitha Stanfast.

ST. JAMES—Crocker Mayor James Morgan was honored for his years of service to the Region I Homeland Security Oversight Committee (HSOC) at his final meeting Jan. 26. Morgan served on the HSOC board as the representative for mayors and city officials.    He did not seek re-election as mayor and will retire for a second time. When the new Crocker mayor takes office in April. Morgan is a retired educator.

“James Morgan is a strong supporter of regional homeland security efforts,” said Meramec Regional Planning Commission (MRPC) Assistant Executive Director Tammy Snodgrass. “His involvement has provided the perspective of city government on the committee, and he has been a faithful representative of all local mayors in the region. We are going to miss his thoughtful input and guidance on homeland security issues, but we wish him the best in his future endeavors.”

Morgan has served on a number of boards associated with MRPC including MRPC’s Board of Directors, chair of the MRPC Planning Committee, the Comprehensive Economic Development Strategy (CEDS) Advisory Committee and the Ozark Rivers Solid Waste Management District Executive Board.

“It has been an honor to work with Mayor Morgan over the years,” said MRPC Executive Director Bonnie Prigge. “Mayor Morgan is a true leader…always engaged and willing to learn more about an issue, and willing to roll up his sleeves to find a solution. He has been willing to serve not only his constituents in Crocker but the entire Meramec Region. He is a true leader, and MRPC is a better organization because of his long-time involvement. We will miss him and his dedication. We wish him the best as he embarks on his next adventure. He truly deserves a wonderful retirement.”

Formed in 1969, MRPC is a voluntary council of governments serving Crawford, Dent, Gasconade, Maries, Osage, Phelps, Pulaski and Washington counties and their respective cities. A professional staff of 25, directed by the MRPC board, offers technical assistance and services, such as grant preparation and administration, housing assistance, transportation planning, environmental planning, ordinance codification, business loans and other services to member communities.