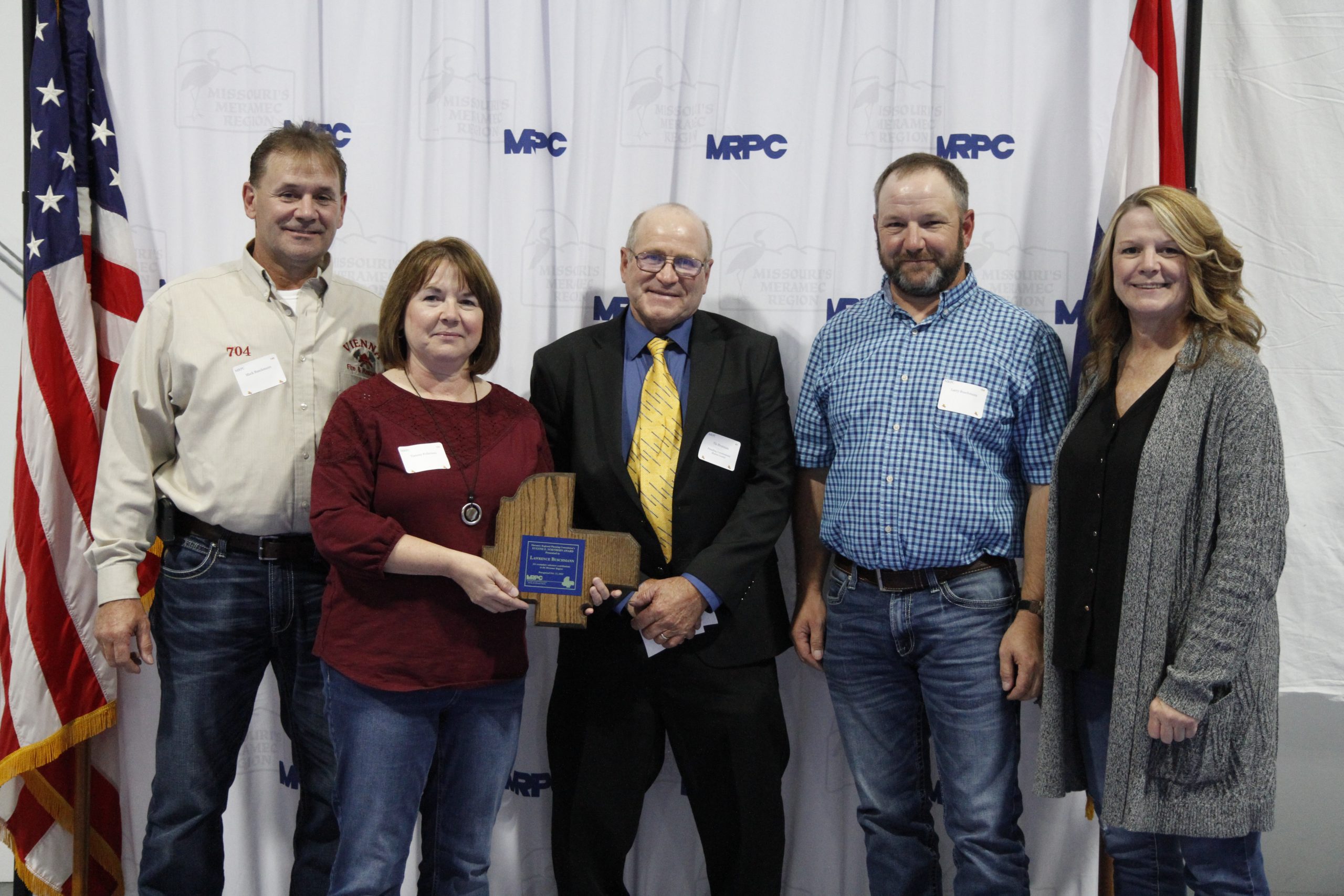 ST. JAMES—Four Maries County residents were honored during the Meramec Regional Planning Commission’s (MRPC) annual dinner Oct. 13 at the Knights of Columbus Hall in Vienna.  Each year, MRPC honors residents, local agency representatives and organizations in the Meramec Region who contribute to their communities by volunteering their time, talents and support. Gracie Rehmert, Hollis Sturdy, Bruce Grotewiel and Lawrence Buschmann were honored as 2022 volunteer award recipients.

Lawrence Buschmann of Vienna was the recipient of the Eugene E. Northern award, the highest honor given by MRPC for volunteers and community service.

Buschmann has been a highly respected person in the Maries County area for decades, and when he gets behind a project, it immediately brings credibility to the endeavor. Buschmann has a real passion for his community and is the kind of guy who wants to help everyone out.

Buschmann has been instrumental in the incorporation of and writing of the bylaws for the Visitation Cemetery in Vienna serving on the cemetery’s board since the early 1970s. As the president of Maries County Bank, Buschmann supported worthwhile projects across the county. Buschmann has whole heartedly supported of the Vienna Volunteer Fire Department. For more than 50 years, he worked tirelessly to keep it equipped and personnel trained. Buschmann helped obtain funding for a new fire house and satellite location, even getting a tax levy passed to provide the Vienna Volunteer Fire Department with more consistent funding. He served on the Vienna Fire Protection District Board since its creation 10 years ago and will be retiring from the board in December.

Buschmann is the father of five children — Tammy Pollerisz, Paula Schwartze, Mark Buschmann, Jeff Buschmann and Larry Buschmann and currently resides on the family farm in Vienna with his wife Dorothy. Buschmann was unable to attend the award celebration so his children were on hand to accept his award.

Gracie Rehmert, daughter of Denise Rehmert and Billy Rehmert of Belle, received a 2022 Outstanding Youth Volunteer award. She was nominated by MRPC Chairman Steve Vogt. Rehmert is a 2022 graduate of Belle High School and is now attending Culver-Stockton College majoring in Business Administration. During her high school career, Rehmert was active in Future Business Leaders of America (FBLA) and National Honor Society, where she served in officer positions. With FBLA, Rehmert was involved with the new Welcome to Belle sign, the Belle Park Gazebo, landscaping at Flag Park, the March of Dimes and environmental awareness. She was the Senior Class Secretary and played softball. As a member of her church, she organized food in the food pantry and Christmas shopping for those in the Operation Christmas program. Rehmert also helped in the nursery during Sunday school.

Also receiving awards for 2022 contributions to their communities were:

Working in partnership with the Meramec Regional Development Corporation (MRDC), MRPC recognizes lending institutions who partner with MRPC/MRDC on local business projects. MRPC’s Lender of the Year award for 2022 was presented to Town and Country Bank.  Town and Country Bank partnered with MRDC on an RLF loan for Rolla Farmers Exchange.

Staff members were recognized at the 2022 awards banquet for years of service included:

Each year, MRPC employees are asked to select one staff member who performs above the call of duty, exhibits exemplary work performance, voluntarily promotes the organization and exhibits a positive work ethic and attitude. MRPC’s 2022 employee of the year was Bethany Ferrell, Senior Accountant II.

This year’s event was hosted by Maries County and the City of Vienna. The night included a reception that began at 5:30, sponsored by Maries County Bank, Unico Bank, The Bank of Crocker and The Bank of Missouri. A silent auction, held during the reception, raised over $1,800 to offset the costs of the dinner. Some 165 people attended this year’s event. The reception and dinner was catered by Argyle Catering.

“We want to thank everyone who came together to make this annual dinner possible, Maries County Presiding Commissioner Vic Stratman for serving as host and Maries County Bank for its financial support,” said Prigge. “It was a wonderful celebration.”

Buschmann Cutline: Lawrence Buschmann of Vienna was the recipient of the Eugene E. Northern award at the MRPC Annual Awards Banquet on Oct. 13 in Vienna. Buschmann was nominated by Maries County Presiding Commissioner Vic Stratman. Unfortunately, he was unable to attend the event so his kids accepted the award on his behalf. Photographed (left to right): MRPC Vicechair Mary Heywood, Mark Buschmann, Tammy Pollerisz, Paula Schwartze, Larry Buschmann and MRPC Chairman Steve Vogt