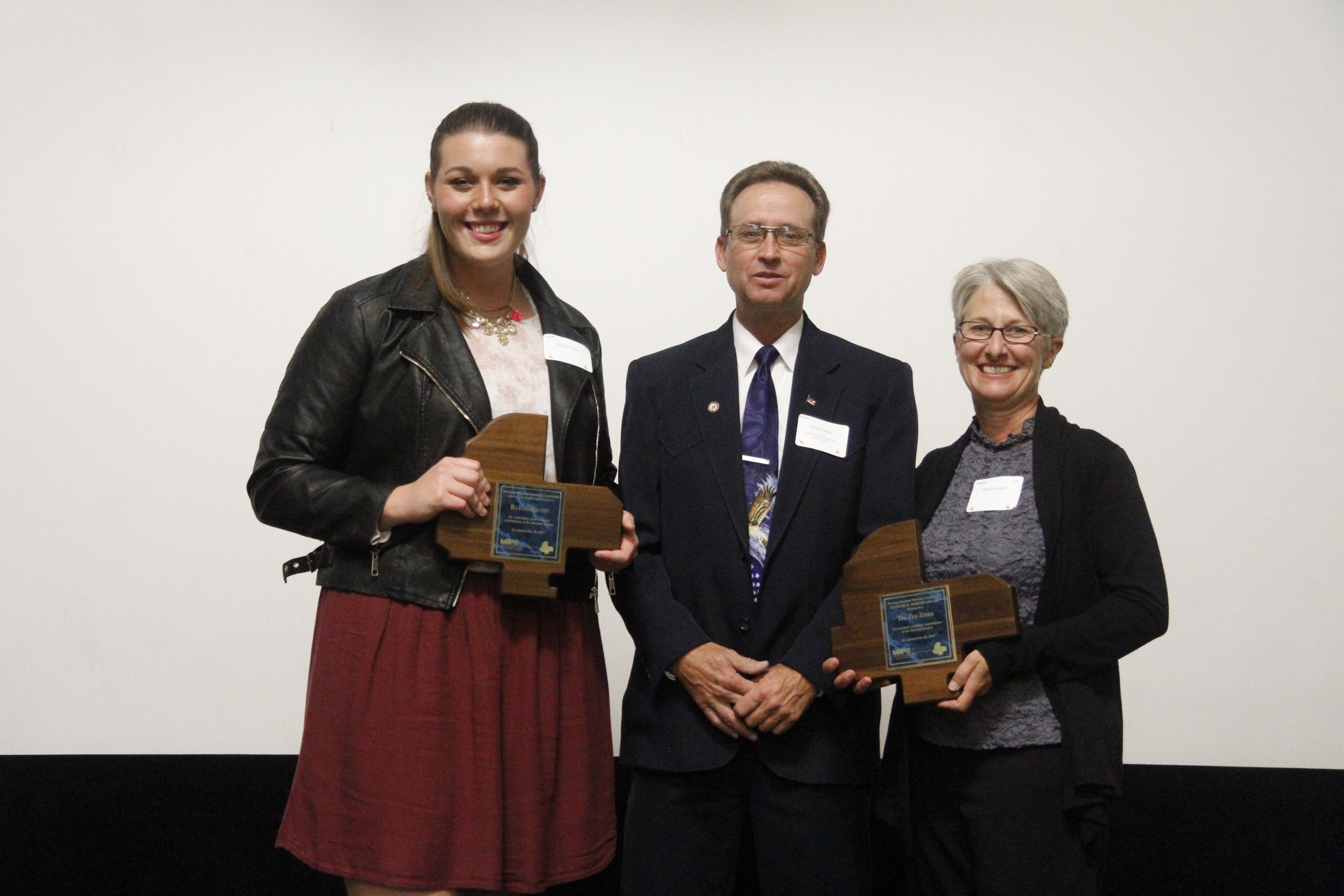 ST. JAMES—Dr. Ted Ziske and Baylee Bilyeu were honored as two of 10 outstanding volunteers who were presented awards at MRPC’s 2017 Annual Dinner Oct. 26 at the Salem Community Center @ the Armory in Salem, MO.

Dr. Ziske, 91, was nominated by Dent County Presiding Commissioner Darrell Skiles to receive the Eugene E. Northern award. The Eugene E. Northern award is the highest honor given by MRPC for volunteers and community service and is named after 25th Circuit Court Judge Northern. Dr. Ziske is a World War II Navy Veteran who has maintained his dental license and served the Salem area since 1954 – never retiring. During the 1960’s, he was the only dentist in the Salem area. Throughout his career, Dr. Ziske has been instrumental in establishing dental care in Dent County and surrounding areas and bringing every new dentist to the Salem area. Joined by Dr. Charles Felt, Dr. Ziske established and staffed an oral surgery clinic at the Phelps County Hospital.

Aside from Dentistry, Dr. Ziske served 15 years on the Salem R-80 School Board of Education, three terms on the Board of Salem Memorial Hospital, and has been an active member of the Salem Rotary Club for over 20 years.

In the early 1960s, Dr. Ziske was inspired to build a dam on Spring Creek, which spawned a legacy of fishing and recreation that will last for generations. The dam helped to create a 35-acre lake, which Dr. Ziske later donated to the Missouri Department of Conversation to help in establishing the Shawnee Mac Lake area east of Salem. When the conservation agency took it over, they discussed with Dr. Ziske on what to name the area and they decided to name it after Mac, the best birddog Dr. Ziske ever had, and the Shawnee Indians who used to inhabit the area.

“Dr. Ziske is well known and respected in the Salem area and is always willing help when needed with a positive attitude,” Skiles said.

Ironically, Dr. Ziske got tired and went home to watch ‘Walker, Texas Ranger’ before his award was presented. His daughter accepted the award on his behalf.

Bilyeu, the daughter of Kim and Greg Wilson, was nominated by Dent County Presiding Commissioner Darrell Skiles and was honored as one of three outstanding youth volunteers. After losing her biological father to illness when she was young, Bilyeu has always made the best of difficult situations. She very active in her school and church approaching everything with empathy and compassion. Bilyeu spearheaded the formation of the Fellowship of Christian Athletes chapter at Salem High School and organized a year-end “Rap-Up,” where a Christian rapper kicked off summer break with a performance. According to Skiles, Bilyeu faces the world with a positive attitude ready to make the best of all situations.

Dr. Ziske, 91, was nominated by Skiles to receive the Eugene E. Northern award. The Eugene E. Northern award is the highest honor given by MRPC for volunteers and community service and is named after 25th Circuit Court Judge Northern. Dr. Ziske is a World War II Navy Veteran who has maintained his dental license and served the Salem area since 1954 – never retiring. He was also instrumental in the formation and establishment of the Shawnee Mac Lake area east of Salem.

“Dr. Ziske is well known and respected in the Salem area and is always willing help when needed with a positive attitude,” Skiles said.

Meramec Regional Development Corporation’s (MRDC) Lender of the Year award was given to First State Community Bank. Don Thompson accepted the award on its behalf. First state Community Bank was honored for partnering with MRDC on a Small Business Administration 504 loan that provided financing for the construction of B&M Quick Stop in Mineral Point in Washington County.

The night included a reception that began at 5:30 featuring Red Moose Vineyards and music by Alter-K-Shon. Progressive Ozark Bank, Bank of Salem and Riverways Federal Credit Union sponsored the reception. A silent auction, which raised over $1,713 to offset the costs of the dinner, was held during the reception hour and door prizes donated by the Central District for Roadway Safety, MRPC’s Mobility Management Program, Progressive Ozark Bank and Scenic Rivers Industries were given out after dinner. 170 individuals were in attendance at the dinner, catered by Country Seasons Catering.

“Our Annual Dinner is the highlight of our year, as our board takes great pleasure in honoring some very deserving volunteers across our region, recapping some of the great projects that have occurred in our communities and taking a look at the contributions MRPC, as an organization, has made to our cities and counties,” said Bonnie Prigge, MRPC executive director. “We really appreciate the hospitality, provided by the city of Salem and Dent County, our hosts, and a special thank you to Sherry Lea and Healthy Dent County for all their hard work to deliver a top-notch location for our evening. The support from local residents was amazing. It was certainly a great evening.”